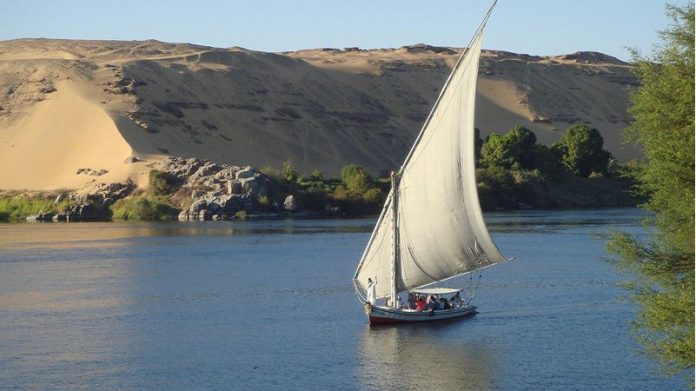 When our felucca with its flapping sails and smiling Nubian crew pulled up at the dock of our Aswan hotel, we knew it was the beginning of a truly magical journey.

In some ways, Egypt was the land I’d expected it to be: an exotic green strip of civilisation clinging to the muddy banks of the Nile. But in others it was a surprise. A big one.

1. The pyramids are better made than you think

The Pyramids of Giza remain to this day the largest individual man-made monuments on Earth. Our group leader Amr explained to us how they were constructed before the invention of the wheel: ramps 25-kilometres long had to be built to enable ancient Egyptian workers to haul car-sized blocks of stone to the top. It was gobsmacking. While inside I inspected these blocks of stone closely. They fit together so precisely you couldn’t have got a matchstick between them!

I grew up in the green valleys of south Wales where it rains a lot – pretty much every day in fact. While sailing the Nile I showed the captain, Mustapha, a picture of a rainbow over a harbour back home. Mustapha was enchanted with the photo and told me he had never seen a rainbow. Further discussions revealed that Mustapha, who had lived in Aswan all of his life, had only ever seen it rain once – for half an hour…. Mustapha was 26 years old! This brought home to me just how vital the Nile really is to Egypt. The Nile is like a ribbon of life running through the desert – in fact 95 per cent of all Egyptians live within 5 kilometres of its banks.

3. The national dish is called Koshari

One of my favourite things about travelling is the new and exciting dishes you get to try, but I didn’t really know what to expect from Egyptian cuisine. Bread is certainly a staple, but the national dish of Egypt is a little-known fare called koshari. Our guide, Amr, first introduced us to koshari in a tiny restaurant in the backstreets of Cairo. It was a mixture of brown rice, macaroni and lentils topped with a layer of crispy fried onions. Balanced on top was a smaller bowl of tomato sauce, which Amr instructed us to pour over the koshari and stir in. It’s just what you need after a day’s temple trekking.

4. Egypt will add a new dimension to Indiana Jones

I’m a long-time fan of the Indiana Jones movies. I must have seen Raiders of the Lost Ark dozens of times. A couple of days after I returned from Egypt I was flicking through the channels of my TV and ‘Raiders’ was on. Just as Indie reached the ‘Map Room’, I realised I recognised some of the hieroglyphics on the Map Room walls! There was the god Horas with the face of a falcon, next to him a key of life and a little further along was an image of my favourite Egyptian god – Amun Ra.

Throughout our trip, Amr taught us about hieroglyphics. In the Cairo museum, Abu Simbel and at the Temple of Karnak in Luxor he deciphered the ancient symbols for us, bringing the friezes carved into the temple stones to life.

Whenever I travel I like to write a journal. I use it as a place to stick the tickets and tokens I collect during my journey. On Day 1 of my trip I collected tickets to the Cairo Museum, the Pyramids and the Sphinx. I asked Amr if it was possible to go to a shop where I could buy some glue. Amr frowned and scratched his head. Glue, he said, was not a common commodity. We visited many markets during our trip, haggling with stall vendors for pouches of exotic tea, pyramid-shaped trinkets and perfumed oils. Amr asked all the stall holders if they could tell us where we could buy glue, but most shook their heads at a loss. Finally Amr got a lead, and I followed him down a narrow, winding alley to a tiny bookshop where the owner produced a glue stick from under the counter.

6. The desert is far more than just sand

While in Aswan, I opted to visit the Temple of Abu Simbel – an incredible place built by King Rameses II close to the Sudan border. To get to Abu Simbel we arose at 4 am and travelled in convoy through the Sahara for four hours. Upon departure it was dark, but an hour into the journey the sun rose illuminating the most incredible scenery. My imagination led me to believe that the desert was a predominantly sandy and featureless place. But in fact the Sahara is a place of staggering and unexpected beauty. Sure, there is a lot of sand, but the sand is multi-coloured – swathes of reds, patches of greyish yellow, streaks of black. It’s also far from flat and featureless – there are rocky outcrops and valleys, raised plateaux and singular obelisks standing proud above the sands.

7. There is no finer way to travel than aboard a felucca

As we boarded our felucca, the breeze over the Nile was surprisingly strong. Our group moved from port to starboard as we zigzagged downstream, helping to balance the boat. Hunger soon struck, so we moored in a sheltered spot on the western bank of the Nile for lunch. Our crew created us the most delicious meal using just a bag of vegetables, a pot of rice and a camping gas stove. We helped to peel and chop the veg, but the alchemy that created the delicious vegetable stew with tahini and salad was down to their Nubian magic. Over lunch the wind dropped, so when we set sail all we had to do was lounge on the deck of the felucca watching flocks of birds feeding on the river, sipping cold Egyptian beer and watching the world go by. While sailing we passed several giant cruise ships with their all-day breakfast buffets and cabaret. The people on board those cruisers have no idea what they were missing out on.